Peddling Pickles in Toronto Via Jerusalem

How does one come to peddle pickles in Toronto via Jerusalem?  The answer comes in the form of a rather long history.

I grew up making pickles in Hamilton Ontario with my grandfather, great uncle, father and brothers.  I was the 4th Generation pickle maker for the company the bears the same “Trademarked Name” as my last name.

I started making pickles at the age of 12 and never stopped.  By the age of 45 I was responsible for the production of 8000 tons (400 truckloads) of cucumbers a year!

The family sold the business in the financial crisis of 2008 and the company’s assets were subsequently sold in bankruptcy to Whyte’s Pickles 4 years later (now the owner of Strub’s).

In 2011 I moved to Jerusalem to fulfill my lifelong dream of becoming a tour guide in Israel along with my wife Debbie.  I enrolled in the Israeli Tour Guide Course (more like a doctorate in Land of Israel Studies!)  It’s a 2-year course that encompasses everything you could ever want to know about Israel and more: history, geography, geology, fauna, historical sites and all the religions that call Israel home.

Upon moving to Jerusalem, friends and family immediately started asking me to make pickles.  They longed for the taste of the good sour dill or half sour new dill they remembered from their childhoods in the “old country” (Toronto).

First, to make sour dill pickles, I needed a format for brining the cucumbers.  I didn’t have barrels and I wasn’t interested in making a 100kgs of cucumbers in my first try.  Also, as anyone who has eaten an Israeli pickle or cucumber knows, they’re not the same as North American warty pickling cucumbers.  They are long and smooth and have a thinner skin (unlike the locals!).  I wasn’t sure how they would turn out. 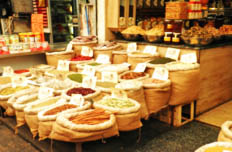 So Debbie and I headed out to Mahane Yehuda, the famous Jerusalem Market, by bus, as we had no car, to procure supplies.

First, I needed to find the proper instrument to ferment the cucumbers in.  I decided on a 16L plastic garbage pail with a lid.  Next we went to the spice area to get the 16 mixed spices I needed to make my pickling spice.  They don’t teach you the names of the spices in Ulpan, so this made this endeavour difficult.  Many of the spices were displayed in beautiful heaps in the stalls.  I was able to get most of them but was unable to find celery seed, even though the word for celery in Hebrew is the same as in English, just pronounced with a heavy Israeli accent.  I went from stall to stall to find celery seed. Most of the owners looked at me with blank looks telling me that they had never heard of it and that there were none in the country (ayn baaretz!).  Finally one stall had some in the back!  We found fresh garlic and dill easily enough and then went looking for cucumbers.  The long, skinny Israeli cucumbers are known in the industry as Persian Cucumbers.  I needed to find cucumbers that were short enough to fit in the 1L containers I found to pack the pickles in.  Most stalls only had longer cucumbers.  I spoke to my cousin’s husband (8th generation Jerusalemite) to enquire where to find the proper size cucumbers.   He told me I had to go to the Iraqi part of the market and that the “guy in the corner” always has small cucumbers.  I found the Iraqi Shuk section (never knowing that it existed) and found the cucumber stall in the corner with the small cucumbers.

We filled up two 16L buckets with cucumbers and proceeded to haul our supplies home by bus.  Having just arrived in the country a few days before, we mistakenly got off the wrong stop and had to walk a half a kilometer uphill to get home our very heavy load.  Debbie commented that this was quite a change for Marty Strub to be schlepping cucumbers uphill in Jerusalem instead of ordering truckloads to the factory dock.  I said, “This takes me back to how my great grandfather started to make pickles in his backyard in Hamilton Ontario 80 years ago.” 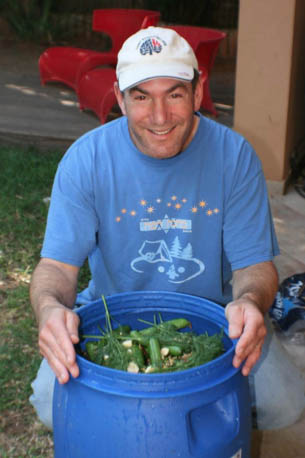 I brined the pickles on the back porch (literally looking over the walls of the Old City). They came out great and we were able to give them to friends and family for the Holidays.  Friends from Toronto who had been in Israel for many years asked if I was going to make more, because they would be happy to purchase them.  I started Marty’s Pickle Club and started making 60L barrels of pickles on my back porch in Jerusalem and was soon selling 60 1L containers a week to Toronto/Ra’anana/Jerusalem expats and friends, hand delivered for 25 NIS a jar.

I said to Debbie, if we ever find ourselves back in Canada, we could do the same thing. In Canada I have many more friends and family and a real reputation as a pickle maker!

11 months later I was back in Canada cleaning up the mess of the bankruptcy by the company that had originally bought the Strub business from our family.  I was hired by Whyte’s Foods (who had bought the assets out of bankruptcy) as a consultant to run the production for a year so they could move the production in an orderly fashion back to their base in Quebec.  We  reluctantly left Jerusalem, my tour guide dream and many disappointed members of Marty’s Pickle Club Israel.  I found myself doing the same thing I had done for the previous 30 years – making pickles in Canada.

Two years later, with a grandchild on the way and another child getting married, Israel was no longer an option.  I said to Debbie, “Remember what I said in Israel, that if we found ourselves back in Canada I could replicate what we did in Israel with the pickles but on a little larger scale but still as a boutique business.?”

So I started Marty’s Pickles in Canada the summer of 2014.  It was a little easier in Canada.  I knew the farmers, and I knew where to get spices and barrels for fermenting.  I decided, as I had in Israel, to only make small batches of pickles using only local fresh ingredients – no spice oils, emulsifiers, colouring or preservatives. – just as my great grandparents probably made pickles over 80 years ago. 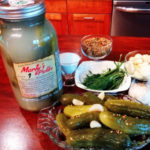